Clash-A-Rama, it’s a most popular animated Webisodes based Clash Royale & Clash Clan Game. This episode brings lots of happiness, fun, bunch of jokes, you will enjoy Clash A Rama if you ever played any of Supercell game.

The Clash-A-Rama episode series was started on 6th Dec & so far it has reached 10 episodes.

The first episode of Clash-A-Rama was launched on 6th December 2015 called ” Giant vs Giant Problem”. 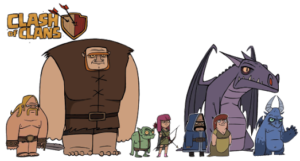 The Clash-A-Rama show is all filled with plenty of jokes and humor, a reference to other Supercell popular game the most notable game which I am still playing “Boom Beach”. The show only makes you get interested in this Clash A RAMA episodes series if you have played or playing any Supercell game.

Here is the list of all Clash A Rama Episodes.

5. Ballad of the Barbarian

6. A Knight to Remember