I’m going to answer the question ‘why gas giants (large planets that have a gaseous atmosphere) are shaped like a sphere’.

It’s mostly due to gravity. Gravity acts on all objects in space. It acts particularly over large distances. So, in a gas giant like Jupiter, what’s happening is that gravity pulls on all matter in the same way that a person on Earth is being pulled to Earth. That’s why we’re not floating in space, but can stand on the ground. The same is happening in Jupiter. All the gas is just mass. It’s little particles spread apart in the gas rather than clumped together in solid matter; like a rock, for example.

So what’s happening then is gravity is pulling the material towards the center of Jupiter. There is some gas pressure from the atmosphere, for example, and some heat also that acts outwards, that wants to push things away. When things get hot, they want to expand. The reason why everything stays in the sphere is because gravity is pulling things in. This pressure from the planet is pushing 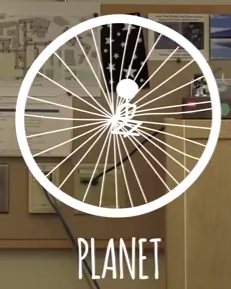 things out, it keeps everything in a nice equilibrium. The result of that is actually a sphere, because the force of gravity acts in the same way in the same amount in all directions. Therefore, if you sit in the middle of the planet and you have a whole bunch of strings in your hand that are attached to all points around you, behind you, and in front of you on the planet, those strings all have to be equal.

If you imagine you were sitting in a cube and gravity is pulling things in and the pressure is pushing things out, then that would actually disrupt the cube because the force is not equal in all directions. If you have a shorter string right to the flat part of the cube in front of you, and you would have a longer string– you would need a longer string to the corner of the cubed. So, in order to keep things stable and nice and not floating around in space, you would need to pull in the string going to the corner until it has the same length to the string that’s going to the front of the cube. If you do this for all the points around you, you would end up sitting in a ball, in a sphere again. That is why everything, even when it’s made from gas, as long as there’s enough mass that gravity can act on, is nice and contained in a nice big ball.

(Visited 50 times, 1 visits today)
Tags:gas giants round, gas planets round, jupiter round, why are, why gas giants sphere