How do 3d glasses work

You may have recently gone to a movie theater, put on 3D glasses, and watched a 3D movie. If so, you may have noticed that if you removed your glasses, the picture on the screen was weird and distorted. But with the glasses on, the distorted 2D image was a clear 3D.

This article will explain how 3D glasses produce this effect.

In order to understand how 3D glasses work, we must first understand why we see the world in 3D. This is particularly impressive, because each of our eyes, by itself, actually sees the world in 2D. Imagine looking at a field of flowers. Your left eye sees one image of the flowers, and your right eye sees a slightly shifted version of the same flowers. Your brain then combines the two images into a single 3D picture.

You can reproduce this by sticking out your thumb in front of your face. Notice how your thumb seems to jump if you look at it only with your right eye, and then look at it only with your left eye. You might also notice that until you look at your thumb with both eyes, it’s hard to tell how far away it is from the computer screen in front of you. Just like each of your eyes needs to see the correct image of your thumb in order for you to see it in 3D, 3D movie makers, similarly, need to show the correct image to each of your eyes, and let your brains combine the two images into a 3D picture. To do this, the movie makers must ensure that your right eye doesn’t see the image intended for your left eye, and vice versa.

You can imagine, for example, a wall set up right between your eyes, so each eye can only see the image on its side of the wall. This is clearly impractical. This is where 3D glasses come in. Each of 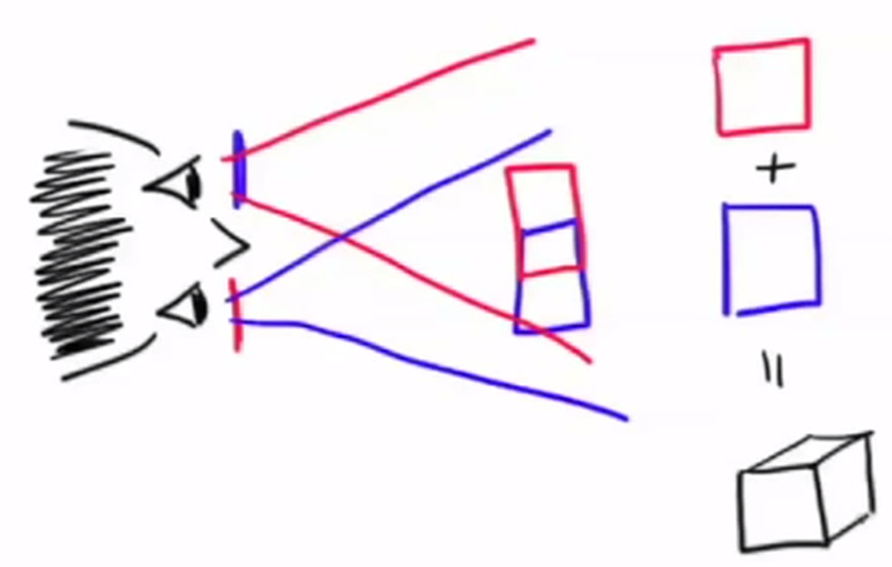 the lens and the glasses ensures that the image intended for that eye passes through, and the other image does not. The first way movie makers showed 3D movies was using different colors for the left and right images. One lens would only let in red light, and the other lens would only let in blue light. The viewers brain would combine the two images– the blue one seen by one eye, and the red one seen by the other– into a 3D picture. This was not ideal, because the image that resulted was not in full color.

Instead, 3D movie makers started using a property of light called polarization. To understand polarization, we must remember that light is a wave. And, like a rope waving in the air, the light, too, can wave in different directions. For example, it can wave horizontally, vertically, or at some different angle. We call the orientation of the wave the polarization of the light. A polarizer is a material that only lets through light polarized in one direction.

For instance, a horizontal polarizer lets through horizontally polarized light, and blocks vertically polarized light. One way to think about it is to imagine light as this rope wave, passing through a cardboard sheet with slots cut into it. Only light that is oscillating in the right direction can make it past the cardboard sheet. Here, we see the vertical wave pass through. It’s oscillating on both sides of the cardboard. The horizontal wave, though, is stopped at the sheet. In reality, a polarizer isn’t a cardboard sheet with slots cut into it. It’s a special material that absorbs the light in one polarization, and let’s through light in the other. This is a real polarizer that is filtering the light from an LCD computer monitor.

But now the light from the screen is not lined up with a polarizer, so the movie doesn’t look right to you. To solve this problem, many 3D glasses today use a different kind of polarization in their lenses– circular polarization. 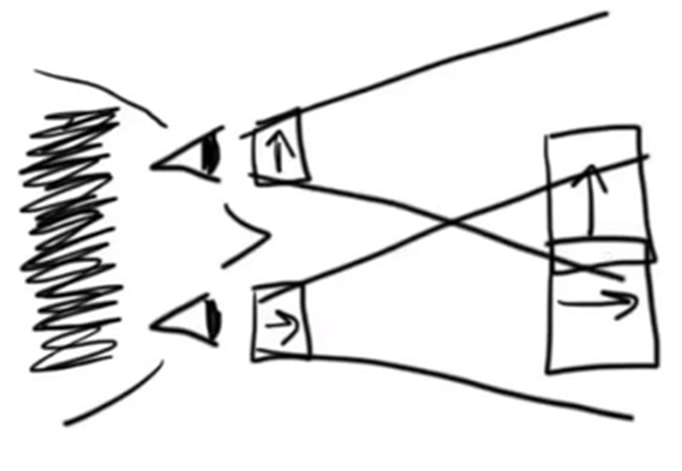 In this type of polarization, the light wave travels towards you in a circular pattern. We can describe circularly polarized light based on the direction in which the wave is rotating– either clockwise, or counterclockwise. There are polarizers that work to only let in one orientation of circularly polarized light. A 3D movie, therefore, could be made with clockwise polarization for your right eye, and counterclockwise for your left. The two different movies, one for each eye, will be visible only through the correct lens, with the correct polarizer, in your 3D glasses. The point of these circularly polarized glasses is that you can tilt your head without distorting the picture. We can set up a demo in the lab to demonstrate this effect. First, we send linearly polarized light through a linear polarizer.

Today, most of the 3D movies that you actually see in theaters are, in fact, made using this type of circular polarization.