Let’s say I have two boxes…

I take the first box and poke a gigantic hole in one of the corners and then place it in a pool of water, the weight of the water rushing in causes the box to sink.

I then take the second box and do the same thing, it tips over a little bit, but it still floats. This box uses the same kind of design that naval architects use to prevent ships 1,000 times bigger from sinking.

What’s so special about the second box that prevents it from sinking, even with the big hole in its side?

However, if the hull springs a leak and fills up with water, there’s no more air to lower the average density of the hull, so the ship sinks. The design of this box basically prevents too much water from getting into it. This box’s hull was divided up into watertight compartments with these walls called bulkheads. So when I made a hole in the corner, only one tiny compartment filled up with water. The rest stayed dry and were able to keep the box afloat. This box is subdivided, and so is this ship. 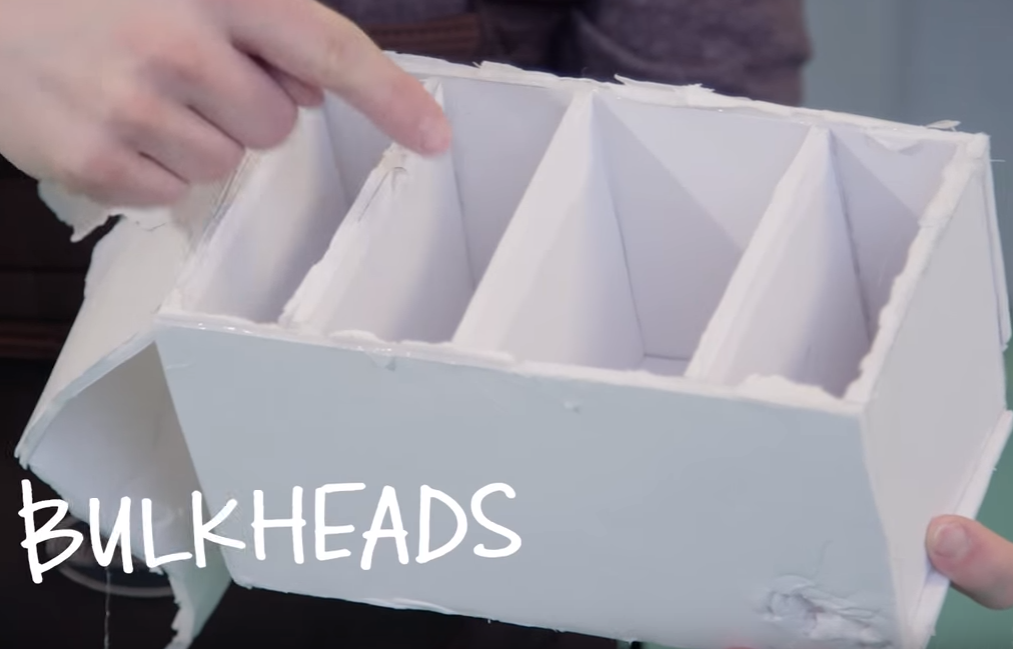 Say this ship is divided into ten watertight compartments. If one area of this ship got damaged, only that compartment would flood, but not any of the others. The added weight of the water here would cause the ship to tip over a little, to be angled or trimmed in the water, but it wouldn’t completely sink, and could still be taken to a port for repairs.

So even with subdivision, why do ships still sink?

Well, it’s impractical and expensive to design an unsinkable ship, especially because most of the time, ships just don’t see that much damage. What naval architects do now is try to predict what kind of damage is most likely to happen when designing a ship. Now, ships are more complicated than this box. Naval architects have to think about where to subdivide the ship, the shape of the hull, and equipment that goes into the compartments. We don’t know when people first start subdividing ships, but the caps of Chinese trade ships as far back as the fifth century indicate that water would be able to enter the vessel without causing it to sink.

It’s pretty crazy that technology that existed so long ago is still being used today. What do you think?

(Visited 426 times, 1 visits today)
Tags:how its made, how to, ships float, unsinkable ships