So let’s first explain the menu, usually a lot of Korean BBQ places like this one, they have sets. So I like to eat a combination of pork, sam-gyeop-sal, and beef short rib, which they have a special here that’s marinated sogalbi. Galbi is beef short rib.

In terms of ordering off the menu, if you’re here for Korean BBQ, you really want to focus on the meat and not order too much other stuff. Also with your meal they’ll bring out a lot of different banchan, which is vegetable and pickled side dishes. There will be plenty of food. You can eat as much as you want and then ask for more! Yum. 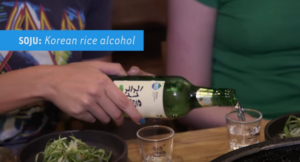 Korean BBQ is a good place for you to come with your friends or your family and have a good time, so drinking, in this case soju, which is a Korean rice alcohol, it’s kind of like a vodka but very very low in alcohol percentage, similar to wine. Cheers! In Korean, Kombe!

So, when you come to Korean BBQ, you’re obviously going to be hit by the smell of meat and smoke, so I like to wear a ratty t-shirt, and then at this point I’m going to put my hair up. This is beef short rib, it’s marinated in soy sauce and other secret ingredients. My favorite thing about Korean BBQ is that it cooks so quickly, so the meat is super juicy. Take one of these red leaf lettuce. You can use the whole leaf, I like to cut it in half. You want to take one of the meat, take a little scoop of this soybean sauce, which has a lot of awesome umami flavor and maybe a little dip of this anchovy sauce too – whatever sauces they give you, you can try all of them. And then you want to wrap it like a meat taco, and then stuff it in your mouth. 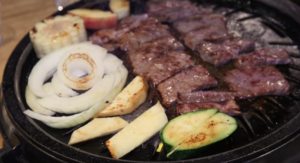 Yeah! The grill is hottest in the middle so I’m going to want to move them over to the side or move them on top of the vegetables so they don’t cook as much. Each serving of meat is technically for one person. When you come with a group, you want to order about a portion to three portions less so say if you come with six people, you can order three to five portions. If you come with four people, maybe two or three, just depends on how much meat you can eat. 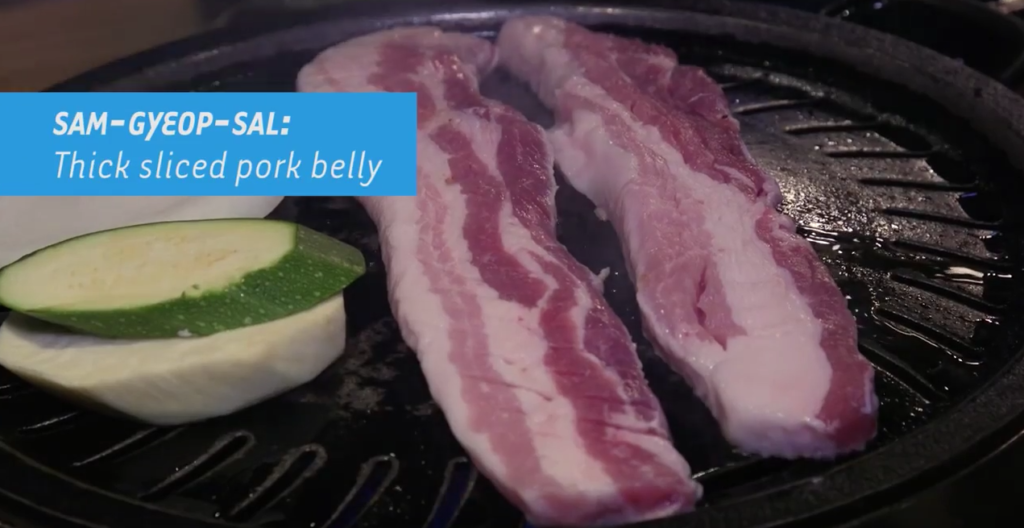 So this is unmarinated pork belly, so that means you can sort of sauce it up more. Here we have salt and pepper with sesame oil, and I’m going to put a little bit of this kimchi on. Kimchi and pork goes really well together for me. Okay I’m gonna go first and as soon as I put it in my mouth, then you put in your mouth.

Yeah. This is cha-dol-ba-gi, which is unmarinated thinly sliced beef brisket. So especially with the thin stuff, you want to make sure you unfold them so you get a good cook on all sides, and then flip them. So they cook so quickly! That’s how you know a place is good, when it has good marbling on the meat. I like to do just a little bit of salt and it’s really fatty so I don’t put the sesame oil on. And then a little bit of bean paste, little bit of scallions to cut through it.

Naeng-myeon, which is cold noodles in beef broth, and over here we have a spicy version of it that’s brothless. Basically naeng-myeon is a really popular dish for Koreans especially in the summer, and it goes perfectly with Korean BBQ. After you’ve eaten a lot of meat, you need something to help you digest and settle your stomach, and cold noodles weirdly, works.

So, after Korean BBQ, you’re super full but you want to drink more, so we got to go to karaoke! “I’ll make love to you like you want me to…”

I’ll catch y’all on the flip side!