Video games are fun to play but have you ever wanted to make one yourself?

How can I make a character run and jump on the screen, just by pressing some keys? Just like websites or the apps on your phone, video games are just computer programs. We make them by giving instructions to a computer or to a video game console. These instructions can be stored in your laptop hard drive or even in a CD-rom. There are commands which make a character appear in the middle of a screen. Or when the player hits the up arrow key, make the character jump. When we want to give instructions like this another person, we use a human language like English, Spanish or Italian. 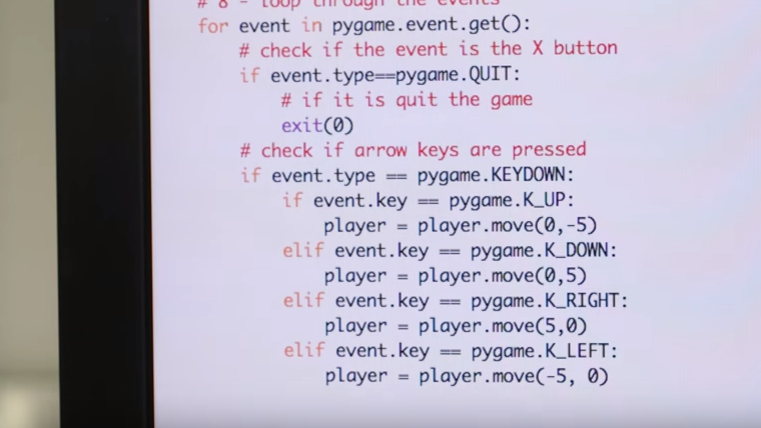 together in order to make something happen on the screen. For example, if I want to move a character around, I would do something like what you see on the right. So if I wanted my cat to go up five pixels in Scratch, I would snap together two blocks like this. And I can do the same with the left, down, and right arrow keys.

Also, I can play with instructions and I can say that when I click on the cat, I can change its color. And also, I can make him– [MEOW] A game like Space Invaders looks simple, but it’s not. It includes player movement, like what we programmed before. But also characters moving by themselves, music and sounds, shooting, collisions, keeping score, and that’s where programming gets interesting. Making something move up five pixels may not sound very exciting, but basic instructions like this one are the building blocks you can use to create your own video games.

What kinds of instructions would you use to create something like a memory game, Tetris, Angry Birds, Minecraft? A professional video game might have millions of instructions written by lots of people all working together to bring the game to life. Human languages have grammar and basic words you can combine together to create things like stories, novels, poems. In the same way, programming languages have grammar and basic instructions you can combine together to create not only video games but also, animation, simulations, and interactive stories. And video programming languages like Scratch, make it easier for anyone to learn how to program.

So instead of just playing video games, now you can make them. So go make one.

Have you built a video game? We’d love to hear about it in the comments below!